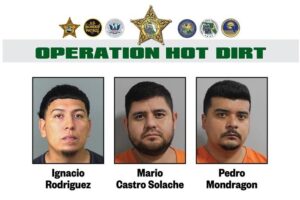 Recently, detectives with the Central Florida High Intensity Drug Trafficking Area task force, working together with local, state, and federal law enforcement agencies, conducted an undercover fentanyl drug trafficking investigation that resulted in three suspects being arrested. It was the largest seizure of fentanyl in the history of the Polk County Sheriff’s Office.

The fentanyl was being manufactured in Mexico and sent into the United States to be made into synthetic pills and sold on the streets.


“Our detectives seized over 11 pounds of fentanyl, which is enough to kill 2.7 Million people,” said Sheriff Grady Judd. “This poison is coming into the country across the border from Mexico, and we are going to continue our investigation into the Mexican drug cartels who are killing innocent people.”

The investigation began in September 2022 when detectives received information that an international drug trafficking organization was trafficking multi-kilograms of fentanyl from Mexico to Bradenton and then into Polk County. Undercover detectives arranged to purchase fentanyl priced at $24,000 per kilo from an unidentified source in Mexico. The local facilitator for the drug buy was identified as 28-year-old Ignacio Rodriguez of Bradenton. Rodriguez confirmed that the source for the fentanyl in Mexico would only deal in large amounts (kilos) and explained that the price fluctuated based on the quality of the drug.

On September 19, 2022, detectives negotiated the purchase of $60,000 worth of fentanyl. Rodriguez showed up to the meeting in Polk County with five of the six kilograms – two kilos of the fentanyl was concealed in a Cinnamon Toast Crunch cereal box, and the remaining three kilos was concealed in a yellow Igloo cooler.

Rodriguez warned the detectives to be careful or they might overdose; he recommended they wear a mask and gloves; he suggested that they drink milk before ingesting the drug to help with feelings of tightness in their chests. He also told detectives he could sell them marijuana, meth, and cocaine.


During the investigation, two other suspects were identified: 29-year-old Mario Alberto Castro Solache of Raleigh, North Carolina and 27-year-old Pedro Mondragon of Lillington, North Carolina. On October 11, 2022, Solache drove to Polk from North Carolina to meet with detectives to discuss another multi-kilogram sale of fentanyl. He was accompanied by Mondragon. Solache told detectives that he and the supplier in Mexico wanted to establish a portion of their drug trafficking organization in Polk County. Solache was going to move to Polk County and would be responsible for handling the operations here for the Mexican cartels. Detectives took them both into custody on October 12, 2022, and they were booked into the Polk County Jail. They told detectives that they are being paid to collect money for the fentanyl drug dealer in Mexico.

Solache is being charged with conspiracy to traffic in fentanyl (F1). He is in the country illegally, and currently has a Border Patrol hold in the Polk County Jail. He entered the U.S. sometime after May, according to the investigation.

Mondragon was charged with conspiracy to traffic in fentanyl (F1) and bonded out of jail on October 17, 2022.

On October 14, 2022, Rodriguez was taken into custody by the Manatee County Sheriff’s Office on a Polk County warrant for trafficking in fentanyl (F1), conspiracy to traffic in fentanyl (F1), possession of a vehicle for drug trafficking (F2), unlawful use of a two-way communication device (F3), and possession of drug paraphernalia. He was released from the Manatee County Jail on October 15th after posting bond in the amount of $56,500.

Detectives learned during the investigation that the Mexican supplier of fentanyl needed the money from the drug sales to pay two different cartels: La Familia Michoacana and the Sinaloa Cartel. Twenty people were killed in Guerrero, Mexico, during a shooting on October 6, 2022. That area of Mexico is known as Tierra Caliente (Hot Dirt) and has been the source of an ongoing cartel turf war for many years.