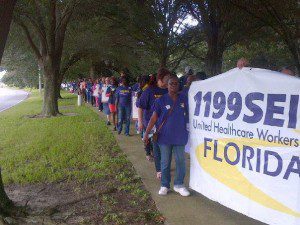 In response to Rep. Mike La Rosa’s continued opposition to extending affordable access to healthcare for more than one million Floridians, SEIU, Organize Now, Florida CHAIN, FOCUS Orlando and community and faith leaders  will hold a press conference on Thursday, Sept. 19 at Rep. Mike La Rosa’s district office to launch a new outreach effort to constituents and local businesses, urging the representative and chair of the Osceola County delegation to accept the $51 billion in federal funding for Medicaid expansion in 2014.

The coalition will launch a business canvass in downtown St. Cloud and begin an outreach effort at public events and to the share of uninsured Floridians in La Rosa’s district and many other legislators around the state.

La Rosa, along with Florida House Republican leadership, refused to expand healthcare to Florida’s uninsured during the last legislative session. With little more than 100 days left to support expanded healthcare access, we risk giving away the $1 billion in federal funding allotted for 2014 to another state. This is the legislature’s final chance to protect Florida’s uninsured before more than one million Floridians are forced to go without healthcare coverage.