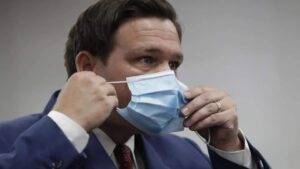 In a major blow to Governor Ron DeSantis on school mask mandates, Leon County Circuit Court Judge John C. Cooper ruled the Florida Governor acted beyond the boundaries of his authority when he signed an executive order blocking local school boards from enacting face mask requirements. The ruling came after a four-day trial in a case brought to court by concerned parents from Hillsborough, Pinellas, Alachua and Palm Beach counties. The Orange County School Board also defied the Governor’s order due to the local COVID-19 surge of the delta variant.


Judge Cooper ruled Florida school districts can legally require their students to wear masks to prevent the spread of COVID-19, adding Governor DeSantis’ order “is without legal authority.” The Governor clearly disagrees and was quick to respond through his staff, centering the argument again around parents’ rights.

“It’s not surprising that Judge Cooper would rule against parents’ rights and their ability to make the best educational and medical decisions for their family, but instead rule in favor of elected politicians,” said Communications Director Taryn Fenske. “This ruling was made with incoherent justifications, not based in science and facts — frankly not even remotely focused on the merits of the case presented.”

In Orlando, State Senator Linda Stewart thanked the Orange County School Board for defying Gov. DeSantis on school mask safety protocols ahead of the court ruling.

“The Governor just can’t go out and make executive orders when the school board has the ultimate authority,” State Senator Stewart posted. “Governor overreacted his authority.  Thank you Orange County SB for your correct action on mask mandate.”

Ultimately, this issue will likely continue through the gubernatorial election as the Florida Democratic Party is also attempting to appeal to parents while attacking Gov. DeSantis.

“Judge Cooper’s ruling represents a major victory for schoolchildren and their families all across Florida,” Florida Democratic Party Chair Manny Diaz said. “It also validates the bold actions of all those courageous school boards in our state that defied an authoritarian governor bent on playing politics rather than allowing them to protect the lives of kids by enacting prudent health protocols.”

Both sides are not going to drop this issue any time soon.

“We are used to the Leon County Circuit Court not following the law and getting reversed on appeal, which is exactly what happened last year in the school reopening case,” Gov. DeSantis’ office added. “We will continue to defend the law and parent’s rights in Florida, and will immediately appeal the ruling to the First District Court of Appeals, where we are confident we will prevail on the merits of the case.”

“Governor DeSantis’s unconstitutional executive order banning mask protocols in schools was born from a stunning combination of blind political ambition and stupefying irresponsibility,” Diaz added. “It is an outrage that Florida’s parents had to go to court to force this administration to accept the decisions of local school leaders to implement the public health measures they deemed necessary to save lives.”