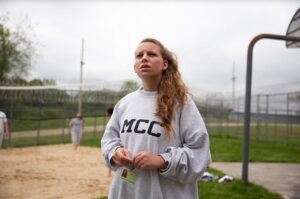 There’s something to look out for at this year’s Florida Film Festival. The film is Jacinta, the filmmaker is Jessica Earnshaw and it’s screening at the Florida Film Festival on April 21st at 6:30pm, or available to be unlocked virtually through the festival 4/20–4/23 at 12:00am.

Jacinta follows a young woman in and out of prison as she attempts to break free from an inherited cycle of addiction, incarceration and crime. Filmed for over three years, Jacinta begins at the Maine Correctional Center where Jacinta, 26, and her mother Rosemary, 46, are incarcerated together, both recovering from drug addiction.


“Spending time with Rosemary, I learned she was incarcerated alongside her daughter, Jacinta, then 26 years old. I found the dynamic between Rosemary and Jacinta moving,” said filmmaker and director Jessica Earnshaw. “There was so much love and tenderness between them and also a complexity as they recounted stories of crime. There was also a multi-generational cycle of addiction and incarceration in their family, with Rosemary’s father having been incarcerated at the same prison decades earlier. I’ve always been interested in the way patterns repeat themselves through generations, how unhealed trauma is processed by the next generation and the strong ties that bond mothers and daughters together. I was curious to understand how Jacinta ended up following in her mother’s footsteps.”

As a child, Jacinta became entangled in her mother’s world of drugs and crime and has followed her in and out of the system since she was a teenager. This time, as Jacinta is released from prison, she hopes to maintain her sobriety and reconnect with her own daughter, Caylynn, 10, who lives with her paternal grandparents. Despite her desire to rebuild her life for her daughter, Jacinta continually struggles against the forces that first led to her addiction.

Critics are also already praising the film. The Hollywood Reporter said the film “reveals the extent to which people can surprise us — especially people we’ve written off as just another sad statistic, as another victim of America’s ongoing and relentless opioid epidemic.” With unparalleled access and a gripping vérité approach, director Jessica Earnshaw paints a deeply intimate portrait of mothers and daughters and the effects of trauma over generations.

“Jacinta has also now watched the film six times, the first time taking place before we locked picture,” Earnshaw added. “The film has become a tool of empowerment for her as she’s shared it with her sociology professor, her therapist, as well as her peers from the prison. The film has also sparked some important conversations with her family members.”

Be sure to see this film as part of the Florida Film Festival.