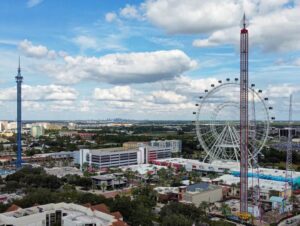 The Orlando SlingShot and Orlando FreeFall have opened at ICON Park, making the entertainment complex the “Land of the Giants” with three world’s tallest attractions.

“The SlingShot Group now has three world-record-setting attractions at ICON Park – The Orlando StarFlyer, SlingShot and FreeFall,” said owner Ritchie Armstrong. “We’re extremely excited to welcome guests from all over the world and give them the thrill of a lifetime!”


The Orlando SlingShot™ at ICON Park stands at 300 feet, making it the world’s tallest slingshot. The two-tower attraction launches two riders out of an “exploding volcano” approximately 450 feet straight up into the sky, reaching speeds of up to 100 mph.

The Orlando FreeFall™ at ICON Park stands at 430 feet, making it the world’s tallest free-standing drop tower. Thirty riders at a time can embrace the beautiful sites of ICON Park and I-Drive as the ride vehicle rotates around the gigantic tower and rises high into the skyline. Once the ride vehicle reaches the top, it’ll tilt forward 30 degrees and face the ground before free falling nearly 400 feet at speeds reaching over 75 mph.

“ICON Park is devoted to creating unforgettable experiences for our guests. The world’s tallest slingshot and drop tower make great additions to our world-class line up,” said Chris Jaskiewicz, ICON Park president and CEO. “Between The SlingShot Group’s three towering attractions and The Wheel, the tallest observation wheel on the East Coast, ICON Park truly is the ‘Land of the Giants.’”

ICON Park is at the center of the Orlando Entertainment District and includes free parking.