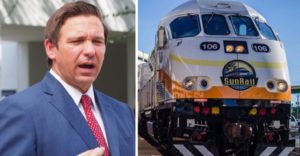 Local officials are in more trouble than expected regarding future funding of SunRail after Republican Governor-Elect Ron DeSantis made comments about trains and roads. Responsibility of SunRail is set to shift to local governments, and people like Orlando Mayor Buddy Dyer already continue to lead their governments to financial problems that are hampering basic services and conditions for residents. What will happen if more of the SunRail costs and responsibility fall to people like Dyer, who definitely doesn’t have the needed resources to turn around its failure?

“I’m skeptical of some of the ideas that we’re just going to create some big train and everyone’s going to be happy,” DeSantis said. “Florida has been built around the automobile. People have subdivisions, they have parking spots. It’s very hot, obviously now in the summer time. So I don’t think that doing a train is going to be the answer to it.

“I think we’re basically an automobile centered society, and until that behavior changes, I do think we need to work on upgrading and expanding our roadways,” DeSantis added.

David Porter of Sunrailriders – Florida posted video of DeSantis’ comments with a warning about Central Florida’s public transportation future. “Next time someone asks about a rail link to Orlando International Airport, the DeLand extension, or weekend and late-night SunRail service, here’s the answer. If SunRail is going to survive, much less expand, it’s going to be up to the local politicians and business leaders.”

Central Florida just lost any kind of partner for increased statewide rail funding it appears. That means more costs that the local governments are not ready to cover. Based on the words of the incoming Governor, mayors like Buddy Dyer won’t be able to kick this can down the road. So what will they do?