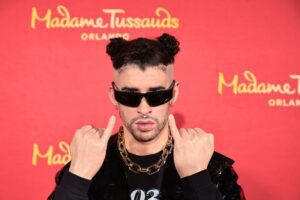 For two years running, Bad Bunny has held the title of most-streamed artist in the world on Spotify. Bad Bunny is an icon and one of the most sought-after artists around the world.


The figure in Orlando is wearing an outfit originally from his WWE Royal Rumble performance and is featured in his “Booker T” music video. The trenchcoat, vest, trousers, and pants were also donated by Bad Bunny. Guests will step into the ultimate fiesta with exclusive soundbites from “El Conejo Malo.” The experience will surround Bad Bunny’s fans in colorful neon lights and immerse them in the vibrations of his reggaeton hits.

“Bad Bunny is one of the world’s biggest stars; his incredible vocal talent and skills as an entertainer have led to a massive fan base around the globe,” said Madame Tussauds Head of Marketing, Matthew Clarkson. “The figures in Orlando and New York City will allow his faithful fans to get up close and personal with him in a way that’s only possible at Madame Tussauds.”

Bad Bunny worked closely with the Madame Tussauds studio artists in London to perfect both of his custom wax figures. The studio artists took approximately 200 measurements and photographs from every angle during each of the singer’s sittings to capture his exact features, followed by meticulous detailing, sculpting and months-long visual research. Each Madame Tussauds figure takes approximately six months to create.

Fans will instantly recognize the New York City figure’s signature pose, selected by Bad Bunny himself. The figure at Madame Tussauds New York is wearing the iconic all-silver look from his 2020 Super Bowl performance alongside Jennifer Lopez, Shakira, and J Balvin, including theactual silver jacket. Upon entering the “Music Room,” guests will be greeted by Bad Bunny and surrounded by the sounds of his infectious discography. As the headliner of the last space in the attraction, Bad Bunny’s wax figure is sure to leave a lasting impression on every fan.

Madame Tussauds will offer his fans a chance to get up close and personal to their favorite musician with no ropes or barriers.

Orlando Weeps, but Orlando Is Strong