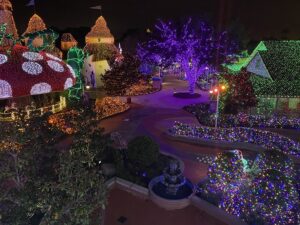 Cinderella’s glass slipper; a 14-foot-tall wreath made from 86,000 DUPLO Bricks; and the Santa Suit worn by Edmund Gwenn as Kris Kringle in the 1947 movie, Miracle on 34th Street. These are just a few of the visually stunning, over-the-top design elements that are part of the first-ever Night of a Million Lights, a walk-through, fully-immersive holiday light spectacular scheduled to dazzle the public through January 3rd at Give Kids The World Village in Kissimmee.


Some dates are already selling out for the socially distanced event, which benefits Give Kids The World Village – an 89-acre, whimsical non-profit resort that fulfills the wishes of critically ill children from around the world who want to visit Central Florida. Tickets can be purchased at www.gktw.org/lights.

“The breadth and scope of this festive display have to be seen to be believed,” says Give Kids The World President and CEO Pam Landwirth.  “Walt Disney World Resort’s donation of more than three million lights, combined with the elaborate designs of so many wonderful partners, will astound Central Florida families, while enabling us to continue our mission to transform the lives of critically ill children and their families.”

For 52 magical nights, visitors can stroll amidst the lights, ride the Village’s array of storybook accessible attractions, and enjoy complimentary treats during this first-of-its kind event. The installation includes a glittering 150-foot tunnel, 150 wireframes and 45 wish family residential villas exquisitely decorated by Village partners. In addition to experiencing these elements, event attendees can pay the holiday spirit forward by donating an unwrapped toy to the U.S. Marine Corps Reserve Toys for Tots program of Seminole and Osceola Counties. Donation boxes will be located in Parking Lot A beneath the lighted Christmas tree.

“I’m honored we had the opportunity to continue our support of Give Kids The World Village in this new way that will help spread happiness throughout our community and a little magic throughout the Village,” said Walt Disney World Resort President Jeff Vahle.

In addition to the 14-foot, step-in frame wreath – which weighs 1,600 pounds and took 500 hours to build, LEGOLAND’s display includes a massive snowman created from 26,000 DUPLO Bricks (130 hours) and a LEGO Elves and Bells display made from 14,000 LEGO Bricks (60 hours) specifically made for Night of a Million Lights.

“We are delighted to continue our partnership with Give Kids The World and bring some bright, awesome LEGO® cheer to Night of a Million Lights. We hope our LEGO model displays and larger-than-life LEGO wreath photo stop give families a new reason to smile this holiday season,” said LEGOLAND Florida Resort President Rex Jackson.

Planet Hollywood’s memorabilia display inside Towne Hall at Give Kids The World Village features the Snow Sled used in Jack Frost; toys and other props used in Jingle All The Way; the choir robe worn by Whitney Houston as Julia Biggs in The Preacher’s Wife; the Taxicab Operator’s License used by David Johansen as the Ghost of Christmas Past in Scrooged; and much more.

Proceeds from Night of a Million Lights will support Give Kids The World’s mission to provide weeklong, cost-free wish vacations to critically ill children and their families.  Since 1986, Give Kids The World has welcomed more than 176,000 families from all 50 states and more than 76 countries.  The Village closed to wish families temporarily in mid-March due to the COVID-19 pandemic, delaying nearly 6,000 wishes.  Night of a Million Lights will raise funds to ensure that the wishes of critically ill children can be fulfilled once the Village reopens.  For more information, visit www.gktw.org.