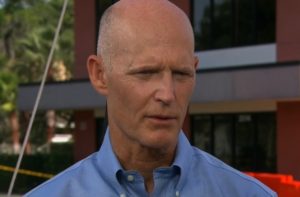 Florida Gov. Rick Scott has approved an agreement to pay $1.1 million in legal fees to attorneys including the Brady Center and its pro bono partners who, representing doctors, successfully challenged an NRA-backed Florida law that prevented doctors from talking to their patients about the risks of guns in the home. The lawsuit, led by Ropes & Gray, and assisted by attorneys with the Brady Center, Reed Smith and the former firm Astigarraga Davis Mullins & Grossman, ultimately resulted in a landmark decision by a federal appeals court striking down the law as unconstitutional.


Ropes & Gray announced it would donate $100,000 of its fee award to the Brady Center to Prevent Gun Violence, enabling the center to expand its initiatives to protect children from the risks posed by guns.

The agreement, which required the personal approval of Governor Scott, stemmed from a February ruling in Wollschlaeger v. Governor of Florida, which struck down key provisions of the Firearm Owners’ Privacy Act (FOPA), the so-called Florida “gag rule.” Florida was obligated to pay attorneys’ fees since the law was found to violate constitutional rights. The agreement was another clarion call to other states considering potentially unconstitutional NRA-backed laws that undermine efforts to reduce gun violence.

The Florida legislature adopted FOPA at the request of the NRA in an effort to stop doctors from engaging their patients in discussion about the risks of firearms in the home and how to reduce them. A number of Florida doctors, represented by Ropes & Gray, the Brady Center, and Reed Smith, challenged the law in 2011, after which the Florida attorney general opted to defend the law in court.

In February, the full panel of the United States Court of Appeals for the 11th Circuit in Atlanta held that the law violated the First Amendment rights of the plaintiffs. Under the law, doctors could have been censored, fined, or penalized through the loss of their license to practice if the Florida Board of Medicine found they violated the law.

“Florida taxpayers just paid $1.1 million because of the gun industry’s unconstitutional, anti-truth agenda designed to increase gun sales at any cost—including children’s lives,” said Dan Gross, president of the Brady Center to Prevent Gun Violence. “The gun lobby wants Americans to believe a gun in the home makes them safer, but 89 percent of unintentional shooting deaths of children occur in the home, often because of easily accessibility of unlocked, loaded guns. Physicians have a critical role to play in preventing these deaths by talking to patients about the true dangers of guns in the home, and we will not allow their voices to be silenced by the gun industry. This award is a message to states to think twice before enacting or defending laws that put lives at risk just to boost the gun industry’s bottom line.”

“This agreement is an important victory for public safety and free speech rights, and a crushing defeat for the corporate gun lobby and the politicians who do its bidding,” Jonathan Lowy, co-counsel in the case and director of the Brady Center’s Legal Action Project, said. “Politicians and special interest lobbies have no business standing between doctors and their patients, or keeping doctors from telling people the truth about the risks of guns or other products. Doctors have the right to decide how best to advise patients about risks that may endanger their families, and parents have a right to full information so they can make smart, informed decisions about how to keep their families safe.

“Ropes & Gray has done incredibly impressive work, and the combination of its extraordinary lawyering and dedication to the public interest is a model for all lawyers,” said Avery Gardiner, Brady’s Chief Legal Officer. “Ropes & Gray’s generous donation to Brady will enable us to expand our work to protect children and educate families on the facts about gun safety. We are grateful for Ropes & Gray’s leadership and hope that states across the nation will engage their doctors and citizens in honest, straight-forward discussions about gun safety.”

“Doctors can go back to giving their best advice to patients when it comes to gun safety,” said Douglas Hallward-Driemeier, appellate & Supreme Court partner, Ropes & Gray, who argued before federal and appellate courts on behalf of plaintiffs. “From day one in bringing this case, our commitment has been to protect doctors’ First Amendment rights to ensure the safety of individuals, families and communities in Florida. The successful resolution of the litigation and subsequent fees and costs award are both critical to furthering that goal.”

“I’m proud that the state acted reasonably to put this matter behind it,” said Edward Mullins, office managing partner of Reed Smith’s Miami office. “Our team hopes this award will deter future efforts by the Florida legislature to curtail speech of professionals or anyone on not only this issue but any important matter. Now, more than ever, we need free and open discourse on all topics.”


Numerous studies have proven that a gun in the home actually makes its residents less safe – 89 percent of unintentional shooting deaths of children occur in the home. The reality is that a gun in the home is more likely to be used in a homicide, suicide, or accidental shooting, than in self-defense. Recent research has shown that one third of all households with children under the age of 18 have a firearm, and more than 40 percent of these households store their guns unlocked.

“Legislators across the country should learn from Florida’s example that if you side with the corporate gun lobby instead of your constituents, you endanger the safety of children and families, impinge upon First Amendment rights of doctors, and force taxpayers to pay millions to unsuccessfully defend unconstitutional laws,” Lowy added. “Thankfully, in this case justice prevailed and the Court recognized that doctors have a First Amendment right to tell the truth about guns, and the risks they can pose to children and families.”

Have You Been Tested for HIV Lately? If Not, Doctors Say You Should