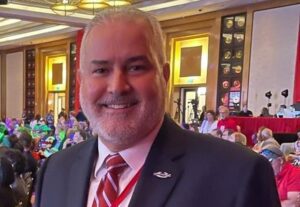 
”I’m a strong believer of empowering women in our great state,” Santos said. “In the next few days, we will be presenting our complete legislative platform that will include targeted measures to ensure a level playing field and more opportunity for women. A bill such as the Working Families Flexibility Act, filed by republican senators Mike Lee (Utah) and Shelley Moore Capito (W. Virginia), that would give employees more flexibility on how to use their overtime benefits is a great initiative that I will make sure passes the House in January.”

Santos also pledged to support legislation that defines ‘woman’ on basis of biological sex, that expands broadband in small towns, that raises literacy standards for teaching children with disability, that encourages women to own their own childcare facilities, that expands the number ‘safe havens’ where women could safely leave newborns, that expands opportunity in business and politics, including making more small business loans for women startups available.

Lt. Colonel Santos is campaigning as a decorated combat veteran with a distinguished record of more than 30 years of service from the United States Army. He believes his experience will benefit him in Washington. He served in Afghanistan, Colombia, and in several American Embassies in different parts of the world.