With the U.S. experiencing a record number of initial unemployment claims, Central Florida could suffer greatly with the dependence on tourism and hospitality jobs. In fact, Florida is already suffering, with an over 4,000% increase on some metrics according to WalletHub, who released its report on the “States with the Biggest Increases in Unemployment Due to Coronavirus.” Right now, the major theme park attractions are still paying their employees, just imagine what will happen if that stops? Central Florida could be doomed.

To identify which states have experienced the largest unemployment increases, WalletHub compared the 50 states and the District of Columbia across two key metrics: 2020 vs. 2019, and March 2020 vs. January 2020. These metrics compare initial unemployment claim increases for the week of March 23, 2020 to both the same week in 2019 and the first week of 2020. Below, you can see highlights from the report:


Increase in Florida Unemployment Due to Coronavirus (1=Worst, 25=Avg.): 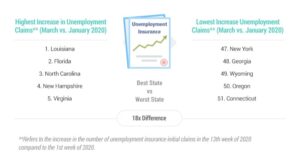 “States should aggressively focus on helping the companies in the most need,” said Jill Gonzalez, WalletHub analyst. “The federal response will include sending checks to most citizens, even those whose income has not been affected by the coronavirus. States can use a more targeted approach to divert resources to the companies affected the most, thus having maximum impact for the money spent.”

“New York has seen a 717% increase in initial unemployment claims from the beginning of 2020 to the 13th week,” said Jill Gonzalez, WalletHub analyst. “This is better than the average increase of 2,002%.”