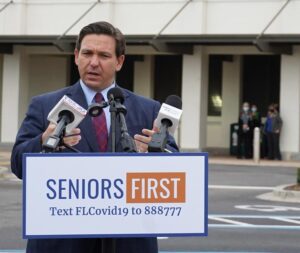 The U.S. Department of Health and Human Services released a report which validates Florida Governor Ron DeSantis’ Seniors First vaccine policy, declaring that “efforts to prioritize and vaccinate” those 65 and older “helped prevent hundreds of thousands of new COVID-19 infections and tens of thousands of deaths among seniors” and “directly correlate[s] to saving lives.”

“As the COVID vaccines first became available, I made it clear that in Florida we were going to put Seniors First to make sure the most vulnerable received the protection they needed,” said Governor DeSantis. “Following Florida’s lead, earlier this year the federal government reversed course from prioritizing younger populations for vaccinations to recommending that states prioritize seniors age 65 and older. When I decided to put Seniors First, the data clearly showed that prioritizing vaccines for seniors would save the most lives. It was the right thing to do, and I am glad to see the federal government has continued to acknowledge this reality.”


The HHS study analyzed the estimated reductions in COVID infection, hospitalization, and death for seniors in the 20 most populous states through the end of May. At that time, only four of those states had higher senior vaccination rates than Florida and the study estimates that in Florida Seniors First reduced senior infections by 17,000, hospitalizations by 6,700, and deaths by 2,400. The full study can be found here.