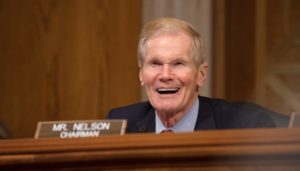 End Citizens United (ECU) today endorsed U.S. Senator Bill Nelson for re-election. Since the Supreme Court’s ruling on Citizens United, few have voiced their opposition to the flood of money in elections as loud as Senator Nelson.

“Senator Nelson understands that the disastrous Citizens United decision put a price tag on our elections, putting our government in the hands of the highest bidders. That’s exactly why he has consistently fought for more transparency and disclosure in our elections,” said Tiffany Muller, president and executive director of End Citizens United. “ECU looks forward to our continued work with Senator Nelson to give a voice to Americans who feel shut out of our democracy by ending the corrosive influence of unlimited and secret money in our politics.”


“The Supreme Court’s decision in Citizens United opened the floodgates to dark money in campaigns. The undisclosed, unlimited money that’s now influencing political campaigns is corrupting our democracy. The American people have a right to know who they are voting for – not just whose name is on the ballot, but who is financing the candidate. And I believe Congress has a moral obligation to correct what has happened to corrupt our system,” said Sen. Nelson.

End Citizens United pledged it will connect Nelson’s campaign with its 216,000 members in Florida and activate its 360,000 national donors to help ensure he has the resources to win re-election. In 2016, ECU helped elect campaign finance reform champions New Hampshire Sen. Maggie Hassan and Nevada Sen. Catherine Cortez-Masto, both in battleground states, by exposing their opponents’ ties to special interests. In the 2018 election cycle, ECU says it projects to raise $35 million from hundreds of thousands of grassroots small-dollar donors.

In the 2016 election cycle, ECU’s grassroots members displayed their strength, raising $25 million from 300,000 donors with a $14 average contribution. Founded two years ago, today the group has over three million members.