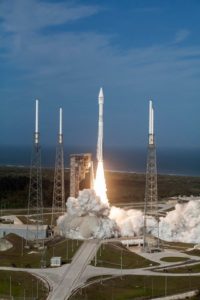 The rocket, a United Launch Alliance (ULA) Atlas V 431, was provided by Lockheed Martin Commercial Launch Services. This is ULA’s 12th launch in 2016 and the 115th successful launch since the company was formed in December 2006. For commercial missions, Lockheed Martin is responsible for contracts, licensing, marketing, sales and mission management of Atlas.

“ULA is honored to have been entrusted with the launch of the EchoStar XIX satellite,” said Gary Wentz, ULA vice president of Human and Commercial Systems. “We truly believe that our success is only made possible by the phenomenal teamwork of our employees, customers and industry partners.”

“The mighty Atlas has marked yet another successful launch as it placed EchoStar XIX into orbit,” said Steve Skladanek, president of Lockheed Martin Commercial Launch Services. “This reliable rocket continues to bring unparalleled precision and schedule assurance to every mission it carries.”

This mission was launched aboard an Atlas V 431 configuration vehicle, which includes a 4-meter extra extended payload fairing (XEPF) and three solid rocket boosters. The Atlas booster for this mission was powered by the RD AMROSS RD-180 engine, and the Centaur upper stage was powered by the Aerojet Rocketdyne RL10C engine. With an average slip date of less than two weeks and successful track record, the Atlas family of rockets provides the most reliable lift in the commercial market. Atlas also offers such precise delivery into orbit that customers can use the excess fuel to extend the life of a satellite and bringing more value to the mission.

ULA’s next launch is the Atlas V SBIRS GEO-3 satellite for the U.S. Air Force. The launch is scheduled for Jan. 19 from Space Launch Complex-41 at Cape Canaveral Air Force Station, Florida.

“As we celebrate 10 years, ULA continues to be the nation’s premier launch provider because of our unmatched reliability and mission success,” said Wentz. “The Atlas V continues to provide the optimum performance to precisely deliver a range of missions. As we move into our second decade, we will maintain our ongoing focus on mission success, one launch at a time even as we transform the space industry, making space more accessible, affordable and commercialized.”