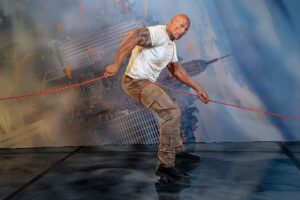 
For the reveal, Dwayne Johnson headed to Instagram to say, “The only way I can describe this…So f’in cool.”

In total, there are four new wax figures of “The Rock” at Madame Tussauds New York, Hollywood, Las Vegas, and Orlando.

“We’re thrilled to welcome Dwayne Johnson’s four new amazing figures to Madame Tussauds New York, Hollywood, Las Vegas, and Orlando. He’s a humbled icon, and a figure that has been highly requested by our fans. We’re honored to have had the opportunity to represent him at the world’s greatest wax museum,” said Madame Tussauds Head of Marketing, Matthew Clarkson.

One of the world’s most successful male actors and producers, Johnson starred in a number of record-breaking box office smash hits, including Jumanji: Welcome to the Jungle and Jumanji: The Next Level, Hobbs & Shaw, Jungle Cruise, Rampage, Skyscraper, Red Notice, Disney’s Moana and many more. Now, he is in the wax figure game.

Johnson’s New York figure highlights the actor in a blue suit with a black turtleneck – resembling his red-carpet moment at the premiere of Jumanji: Welcome to the Jungle in 2017. In Hollywood, Johnson’s figure will greet guests setting the scene for the ultimate VIP party. The movie star and entrepreneur figure strikes a shaka power pose in an outfit inspired by Johnson’s Hobbs and Shaw press conference look in Beijing. The Vegas figure welcomes fans with a ‘cheers’ as they raise a glass at a Teremana Tequila themed bar, Johnson’s record-breaking Tequila brand, bringing the Mana exclusively to the Las Vegas attraction.

Madame Tussauds extensive creative team of sculptors, colorists, hairdressers, and stylists contributed to all four of Johnson’s figures, representing the celebrity in diverse and prominent poses that capture his recent success. Each figure also offers a unique interactive guest experience.