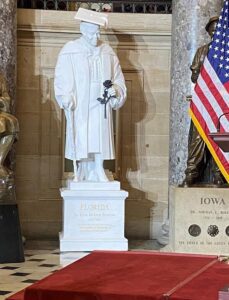 Family members of Dr. Mary McLeod Bethune were joined by Members of Congress for the unveiling of a statue of Dr. Bethune in the U.S. Capitol. The statue, one of two representing Florida, is the first statue of a Black American to represent a U.S. state in Statuary Hall.

The U.S. Capitol hosts two statues donated by each state. Florida previously requested a change to its representation, replacing a statue of General Edmund Kirby Smith, a Confederate general, with one of Dr. Bethune.

Mary McLeod was the 15th child to enslaved parents on a farm near Mayesville, South Carolina and became one of America’s leading advocates for education, civil, and voting rights, the founder of Bethune-Cookman College, and an advisor to five U.S. presidents.


Mary was the only member of her family to go to school. She walked five miles each way and did schoolwork by candlelight. When no missionary opportunities were available, she turned to education, teaching for almost a decade and marrying fellow teacher Albertus Bethune. She purchased a small cottage in Florida, moved with a dollar and fifty cents in her pocket, and taught a first class of five students in a barebones room.

Dr. Bethune expanded her school, founded the first Black hospital in Daytona, fought for civil rights, opened the first public library for Black Floridians, and faced down a KKK mob.

She served in leadership roles in Florida’s premier civil rights organizations, where she fought for educational opportunity, voting rights, child welfare, workers’ rights, and an end to lynching.

She became an advisor to five U.S. presidents, including roles in housing and child health for Presidents Coolidge and Hoover. She became one of President Roosevelt’s closest advisors, and one of Eleanor Roosevelt’s closest friends. In 1936, he appointed her as director of the Division of Negro Affairs of the National Youth Administration, where she worked to employ over 300,000 young people.

The remainder of her life was devoted to education and the fight for liberty. She worked with the National Council of Negro Women and National Association for the Advancement of Colored People. She went to the U.N. and accepted an appointment from President Truman.

Orlando Representative Val Demings led legislation to welcome the statue, and she spoke at the ceremony. Rep. Demings received an Honorary Doctorate from Bethune-Cookman University in 2018.

“Dr. Mary McLeod Bethune was the most powerful woman I can remember as a child,” said Rep. Demings. “I am proud that Dr. Bethune will be Florida’s new face in the U.S. Capitol and know that her lifelong commitment to education and civil rights will continue to inspire all Americans for years to come. I urge all Floridians to read Dr. Bethune’s last will and testament, in which she wrote of the power of hope, love, faith, responsibility to our young people, and thirst for education. She worked to make America better for all people, and it is more than fitting that she should be here representing us in the People’s House.”

“As Florida’s Governor, I was proud to sign a bill in 2018 to commission a statue of Dr. Mary McLeod Bethune to represent our state in the U.S. Capitol and honor her leadership in education, which led to the founding of Bethune-Cookman University,” said Senator Rick Scott. “Dr. Mary McLeod Bethune was a wonderful person and a great Floridian who represents the values of our state, and today her statue joins the company of so many of our nation’s great and historic figures. I’m grateful for the work of sculptor Nilda Comas, Bethune-Cookman University, the Bethune Statuary Fund and Chair Nancy Lohman for all of their hard work leading to this historic day. Today is a day we all have been working toward for years. I am so proud to welcome the statue into our nation’s Capitol, and I hope that American families will learn from her legacy for decades to come.”

Before she died, Dr. Mary McLeod Bethune wrote this.

How Sweaty is Orlando? Sweatiest City in America Named