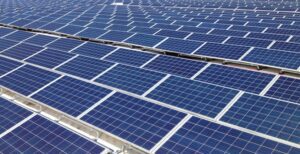 “Green energy means jobs, but right now solar manufacturing jobs are being dominated by China,” said Rep. Demings. “My new legislation would make long-overdue investments in U.S.-based solar manufacturing, creating good new jobs and bringing down the cost of renewable energy as we fight to slow down climate change. Florida is the Sunshine State, and we should embrace this exciting new opportunity to transform sunshine into new American jobs and build a brighter future.”


“As we continue to build a cleaner energy system, we should ensure that its components are being built here in America,” said Rep. Doyle. “Currently, foreign competitors are dominating the manufacture of solar panels and in some cases using forced labor to do so. The Reclaiming the Solar Supply Chain Act would promote the U.S. manufacture of solar panels and solar panel components. We have the best workforce in the world and a growing demand for clean energy, so making the investment that this legislation does would create good paying jobs here at home while creating a cleaner economy.”

“Expanding our domestic solar energy manufacturing supply chain will create jobs and put the U.S. at the forefront of innovation and technology,” said Rep. Dingell. “Through a grant program in the Department of Energy to support this supply chain, we can make sure we’re not relying on foreign competitors for supplies. We’re in a critical moment to provide for hard-working American families and jumpstart our economy – this starts by ensuring the U.S. remains competitive while also combatting the climate crisis.”

“In Michigan, manufacturing is our bread and butter, and we have the potential to be a global leader in clean energy manufacturing, in particular,” said Rep. Slotkin. “This bill will make it easier to build cutting-edge solar technology right here at home, and in the process, it will create good-paying jobs and help the U.S. maintain a competitive edge over countries like China. This is a win for Michigan families, our environment and our national security.”

“Solar energy is critical to the U.S. economy,” said Ultra Low Carbon Solar Alliance Executive Director Michael Parr. “American companies and utilities need a reliable supply of sustainably manufactured solar panels to support our clean energy future. Too many imported solar panels are made in supply chains with high carbon emissions. The Reclaiming the Solar Supply Chain Act, by supporting the expansion of all elements of solar panel manufacturing right here in the U.S., can leverage American innovation, low carbon manufacturing and productive American workers to ensure the supply of sustainable solar we need. The Ultra Low Carbon Solar Alliance congratulates Representatives Demings, Dingell, Doyle and Slotkin for introducing this important legislation and encourage their House colleagues to support it.”

The legislation is also endorsed by the Sierra Club and the Environmental Defense Fund.

Solar manufacturing globally is currently dominated by China. Republicans in the Senate have worked to strip renewable energy funding from the Democratic infrastructure package. Manufacturing related to solar power could create up to 1.5 million new jobs across the country by 2035.

This legislation would provide funding to eligible entities for construction of new facilities that manufacture solar components as well as retooling, retrofitting, or expanding existing facilities that manufacture solar components. Priority would be given to manufacturers that provide the greatest potential for domestic job creation and economic development in economically distressed regions. The bill authorizes $700,000,000 each fiscal year from 2022 to 2026.