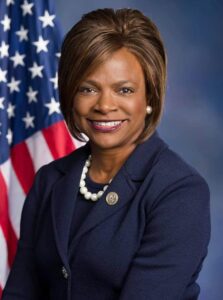 The Homeland Security Capabilities Preservation Act will review past disbursements under the Urban Area Security Initiative (UASI), then to create a plan to continue federal anti-terrorism support for UASI-funded homeland security capabilities that keep people safe in these communities.The DHS Basic Training Accreditation Improvement Act of 2021 will require that all officer training programs for the Department of Homeland Security receive accreditation to ensure a high standard of excellence for officers tasked to protect America.

“The safety and security of every person who lives, works, and travels in Florida is my top priority,” said Rep. Demings regarding The Homeland Security Capabilities Preservation Act. “Our previous experience in Orlando showed that critical public safety funding can be inconsistent, leaving important programs without necessary support. This new legislation would provide much-needed stability and peace of mind to emergency planners across Florida, who will rest easier knowing that when they begin a new initiative to keep Floridians safe, they will be able to sustain those efforts.”

“The UASI program has been one of my top priorities since arriving in Congress and I am proud of the work we have done to restore Orlando to the list and ensure that we can prevent violence – or at least be ready to save lives when the worst should happen,” Rep. Demings added. “As a former law enforcement officer, I have seen firsthand how important these federal dollars are, and I will continue working to ensure that every Florida community has what’s needed to keep every Floridian safe.”

“Keeping Americans safe from all threats, both foreign and domestic, is a top priority of mine,” said Rep. Bacon. “I’m glad to help lead this effort alongside Rep. Demings to direct DHS and FEMA to assess UASI capabilities and ensure federal assistance is made available for these anti-terrorism law enforcement programs, especially in urban areas, which are potential targets for terrorist attacks.”

Orlando Police Chief Orlando Rolon explained, in testimony before the Committee, that for local law enforcement who are on the “front lines of responding to any emergency, whether it be a terrorist attack, natural disaster, or global pandemic, FEMA preparedness grants are critical resources that bolster law enforcement’s ability to prevent and respond to terrorist attacks and other associated threats.”

Rep. Demings is the Chair of the House Homeland Security Subcommittee on Emergency Preparedness, Response, and Recovery, which oversees the UASI program. She previously fought to have Orlando restored to the program. As Orlando’s former Chief of Police, Rep. Demings oversaw the use of UASI funding by the Orlando Police Department.

Law enforcement agencies in 31 cities around the nation—including Orlando, Tampa and Miami—received a total of $615 million in UASI funding this year. They can use this funding to buy homeland security equipment, conduct training exercises, train and pay first responders, and enhance security in order to protect high-profile locations like stadiums, public transit, and theme parks. Florida also received $9,701,894 through the State Homeland Security Program.

“Protecting our safety and security is my top priority,” said Rep. Demings regarding the DHS Basic Training Accreditation Improvement Act of 2021. “As a former 27-year law enforcement officer and Chief of Police, I have seen that training saves lives. When it comes to keeping Americans safe, I believe we have no room for error. The officers at the Department of Homeland Security deserve the highest standards of training and preparation so that they can safely and effectively carry out their mission.”