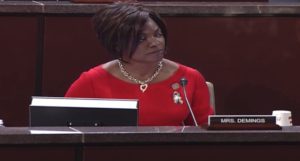 Representative Val Demings successfully amended a bill through the U.S. House Homeland Security Committee to create a new federal grant program through which Orlando could apply for additional counter-terrorism funding earlier this month. The new program would permit cities and jurisdictions that previously received grants under the Urban Area Security Initiative (UASI) program to apply for new funding to sustain counter-terrorism training and equipment. The City of Orlando received funding through UASI in 2010, 2011, 2012 and 2014, but has not qualified for the funding since.


“Earlier this week, we observed the one-year anniversary of the Pulse Nightclub attack. The preparation that led to our local first responders’ successful response was created through previous grant investments, particularly the Urban Area Security Initiative,” Congresswoman Val Demings said at the time. “Unfortunately, the old UASI funding that is supporting some capabilities in Orlando will soon expire, and despite the Pulse Night Club attack, Orlando is, once again, an unfunded UASI. This legislation would help ensure that Orlando does not lose ground on preparedness. I believe we have no greater obligation than to keep the people that we represent safe from harm.”

Chairman Michael T. McCaul (TX-10) agreed to incorporate Demings’ amendment into H.R. 2825, the Department of Homeland Security Authorization Act of 2017, during Committee consideration of the bill on Wednesday. The changes would create a new competitive grant program, that would authorize at least $39 million for the purposes of allowing high-risk urban areas that were previously eligible to receive funds from the Urban Area Security Initiative to preserve core capability gains achieved with previous grant support. Twenty-nine cities, including Orlando, received federal UASI funds in past years and would be able to apply for the funding under the new sustainment program.

Rep. Demings also offered two additional amendments that were adopted during the Committee’s consideration of H.R. 2825: