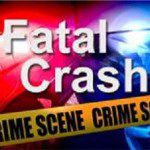 A Deltona driver was killed on Saturday after his pick-up struck a utility pole on Celery Avenue in Seminole County, troopers said.

Owen Hurd, 53, of Deltona, was pronounced dead after his 1994 Ford pick-up truck careened off the road and hit a utility pole on January 1st, FHP said.

Troopers said that it is not clear yet whether alcohol played a role in the crash.