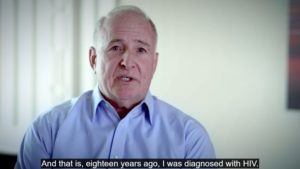 Democratic Congressional candidate Bob Poe revealed this week that he is HIV-positive.

Poe, 61, a former businessman who helped start the Orlando Magic NBA team and once chaired the Florida Democratic Party, made the disclosure in a video posted to his Facebook page, and in an interview with Watermark magazine, which focuses on the LGBT community in Florida.

Poe is running in Florida’s 10th Congressional District, where he will face off against Chief Val Demings, State Senator Geraldine Thompson and Fatima Fahmy in the Democratic primary.

“I have a motto in my life: ‘If you want to make a difference, you have to be the difference,’” Bob Poe said.

Democratic Congressional Candidate Opens Up About Having HIV In Emotional Video