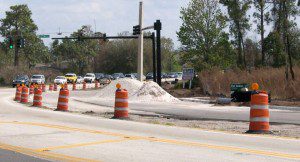 “Working on this important road expansion is one of the very reasons I ran for office,” Commissioner Thompson said. “This road project became a major priority for Orange County since I joined the team. The completion of Alafaya Trail will improve the daily commute for tens of thousands of local citizens.”

This project expands the southern portion of Alafaya Trail from a two-lane to a new four-lane divided urban roadway. The project features safety and pedestrian improvements such as additional turn lanes, two new traffic signals, pedestrian paths on both sides of the road and a multi-use trail with benches.

“The road’s conversion to four lanes will dramatically improve the quality of life for all citizens in East Orange County,” Commissioner Thompson said. “The less time we spend stuck in gridlock traffic means more quality time with our families and more opportunities for being productive citizens.”

The widened roadway and expansion will be open for public travel immediately following the 9 a.m. ceremony.