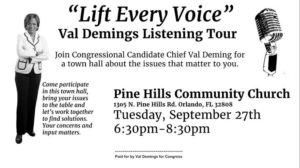 “The concerns of the people of District 10 matter to me,” said Val Demings, Democratic candidate in Florida’s CD-10. “As police chief, I made it a priority to include the community in solving some of our toughest challenges. I want to hear from them and work together to develop solutions, based on each communities needs.”

“Lift Every Voice” will kick off Tuesday, September 27th at Pine Hills Community Church. The campaign is encouraging the public to come and share their concerns with Chief Demings.

The tour includes stops in Pine Hills, Parramore, Apopka, Eatonville, Dr. Phillips, Tangelo Park and Washington Shores. All of the town halls are open to the public and will take place in the next seven weeks.

Details for other stops to be announced in coming days.