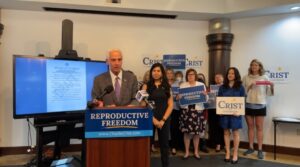 Ahead of the expected Supreme Court ruling, Charlie Crist was in Orlando to announce we have an “emergency” in our country regarding a woman’s right to choose. Crist called the leaked opinion “outrageous” and said people need to “fight back.” Crist pledged to make this a top priority if he is elected Governor, promising an executive order on his first day in office “that will be clear in protecting and fighting for a woman’s right to choose in the Sunshine State.” See the full draft executive order from Crist below.


The issue of choice will clearly become very important in the campaign for Florida’s Governor in both the primary and general election. Governor Ron DeSantis is not going to be shy campaigning on his record, having just signed a bill prohibiting abortions after 15 weeks of gestation. Democratic candidate Nikki Fried, Florida’s current Agriculture Commissioner, is attacking Crist on the campaign trail for his previous “pro-life” positions. Democratic State Senator Annette Taddeo, who is also running for Governor, has also made abortion access and reproductive freedom a campaign priority. But Crist said in Orlando that he is the best candidate on the issue.

“I’m running for Governor so that the people of Florida have a ‘People’s Governor’ again, because right now we don’t,” Crist said. “Our current Governor fights culture wars all day long, every single day.”

Citing the right to privacy in Florida’s constitution, Crist announced the executive order will direct all agencies under the Governor’s authority to not interrupt any woman’s right to choose and make her own decisions about her body and her healthcare.

“That’s why I need to win,” Crist said. “So that woman will have somebody in the Governor’s office that gives a damn about them. And I do. And I will fight for you.”

Crist thanked Rep. Eskamani and all the women standing with him in Orlando for reproductive freedom.

“It is always an honor to have you come to Orlando and meet with our constituents and to fight back against what has been an onslaught on our reproductive rights and on our collective freedoms,” Rep. Eskamani said at the Crist event. Eskamani is a local progressive champion and has long fought for reproductive rights and related issues. She also passionately speaks about how important Planned Parenthood was to her personal journey in life and her own health education.

Crist held the campaign event in Rep. Eskamani’s district here in Orlando. With the attacks in the Democratic primary coming from his opponent, he clearly appreciated having Rep. Eskamani speak in support of his announcement.


“This executive order says clearly that we will not collaborate with any out of state agencies to punish women and punish pregnant people for making this personal decision,” Rep. Eskamani added. She also said that a court challenge is still expected on Florida’s 15-week abortion ban with a lawsuit coming soon. Gov. DeSantis signed that legislation into law.

The contrast between the two parties will be very clear for Florida voters. “Life is a sacred gift worthy of our protection, and I am proud to sign this great piece of legislation which represents the most significant protections for life in the state’s modern history,” Gov. DeSantis said when he signed the legislation.

“We cannot sit idly by as women’s rights suffer attack after attack by Governor Ron DeSantis and Republicans across the nation who don’t trust women to have autonomy over their own bodies. That ends when I become Governor of Florida,” said Charlie Crist. “The women of Florida have a constitutional right to freedom and privacy and I intend to fight tooth and nail to protect Roe v. Wade here in the Sunshine State. I vow to sign this sweeping Executive Order into law on day one of my administration to protect abortion access and reproductive freedom. We will not stop until we deliver justice and equality. The Crist Administration will always be firmly on the side of women.”

The order will also prohibit state agencies from restricting access to abortion, closing any safely operating clinics, or working with any federal officials or states seeking to prosecute women for exercising their reproductive freedom. “A governor with a plan to sign an executive order on day one to protect women’s reproductive freedoms is exactly what Florida needs right now,” Rep. Eskamani said.

But Fried says she is “the only leading candidate for Florida Governor who has never supported a ban on abortion. Fact check it.” She also says Charlie Crist put an “anti-choice extremist” on Florida’s Supreme Court, adding those were Planned Parenthood’s words.

“My record is crystal clear, and Ron DeSantis is on the other side of it,” Crist said. “He’s dead-wrong Ron. Absolutely wrong.”