Tommy Addison’s is a new fine dining restaurant in an old location.  Open for lunch and dinner everyday with menu items reasonably priced in a casual atmosphere in the Ft Gatlin area of Orlando. It was originally opened as a Perkins, you’d think it would have stayed but for some reason it did not go over very well.  Later as another name that was too confusing to remember, it was just too fancy for the neighborhood.  It later folded.  The last prospect lasted a whole two weeks making it the shortest time ever to be open.  The place has been so many eateries through the years and not one ever made it. 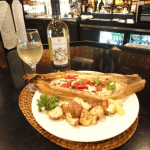 Tommy Addison’s hopefully will change that and be here a long time.  So far it has been open for two months.  Some of the changes I noticed are the bar has been extended while the shades on the windows are more open allowing more light into the place.  One of the complaints people had for the other times was it was just too dark.  The servers are knowledgeable of different menu items and drink specials and they take care of the guest through the whole dining experience.

One of the things that drew me was a sign outside that says, “Boone High School alumni welcome.” I found out that on the first Friday of every month they have special events geared to Boone alumni.

So far I’ve been at least four times and every one has been excellent.  I prefer to sit at the bar because I’ve been by myself.  Each time the bartender and staff have made it more pleasurable by telling me about some of the different items they serve.  It’s also nice to see the passenger and freight trains that roll by on the tracks behind the restaurant throughout the day or night.

The other night I had a tough decision to make of what to order because all of the selections sounded so fantastic.  My dilemma was Baltimore & Ohio Chicken Rolled around three cheeses and diced Prosciutto, roasted and served with Tomato-Sherry Sauce accompanied by a grilled Polenta Cake $10.99, or Shrimp and Grits Gulf Shrimp and Hearty Peasant style sausage, sautéed with Roma tomatoes served with girlled Polenta cake $12.99 or Monroe Street Shrimp de Jonghe Gulf Shrimp, Garlic Butter, Bread Cubes fresh herbs and Parmesan cheese baked in a toasty Italian Bread Dome $13.99.  I chose the chicken item and was not disappointed at all.  It was really worth the trip. I’ve also had a lunch burger $6.99 that was very filling and it’s nice

that you can substitute the fries for a house salad.  They have many special lunch items that are fairly priced and are very appealing.  For dinner if you want something light they have several sandwiches that are also reasonable between $4.99 and $6.99

There are also several desserts that sound delicious.  Key Lime pie for $3.99, Apple Tart with Baked Cheddar Shards $5.99, Chocolate Pudding Cake $4.99 and Fried Cheese Cake $4.99.  I’ve tasted the cheesecake and have to admit that it is a new slant on an old favorite that was more like a pastry than cheesecake. It was so filling I could only eat a bite.