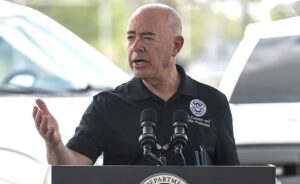 Homeland Security Secretary Alejandro Mayorkas continued playing damage control for the Biden administration at the border. The actual numbers of border crossings contradict what Secretary Mayorkas had previously said with regards to the border being “closed” as there were officially 212,672 reported border encounters in July alone.


That’s up 12.5% from June according to Border Patrol, and it is reaching some of the highest levels in 21 years. Now, Secretary Mayorkas is calling the border issue “one of the toughest challenges we face” and said the border crisis was “complicated, changing and involves vulnerable people at a time of global pandemic.”

The reality of the open border crisis was further illustrated by leaked audio of the Homeland Security Secretary during his visit. Mayorkas told agents the current border situation “cannot continue” and he admitted that the sector recently came close to “breaking.” Criticism of the Biden administration’s border policies have increased, and Florida Governor Ron DeSantis has also been active on the issue counter to Biden.

“This is unsustainable. These numbers cannot continue. We cannot get to a point where we were a couple of weeks ago, and we’re gonna make sure that doesn’t happen,” DHS Secretary Alejandro Mayorkas said in leaked audio provided by a CBP source to Fox News. “We’re looking at the policy options.”

“I know very well, hearing from Chief Hastings and Chief Ortiz and others how close you came to breaking here in this sector, and it’s our responsibility to make sure that never happens again, we don’t get that close again,” DHS Secretary Alejandro Mayorkas said in the leaked audio.

Secretary Mayorkas delivered remarks on what the Department of Homeland Security is doing to address the situation at the border and the Biden-Harris Administration’s efforts to build a fair, orderly, and humane immigration system. But this issue will definitely be divisive ahead of the midterm elections, while also remaining important to the future of Vice President Kamala Harris, who was tasked by Biden to lead the border efforts.