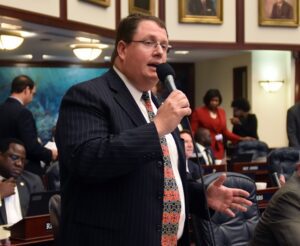 Republican State Representative Randy Fine announced he has filed legislation, HB 57, to ban the use of “Critical Race Theory” in training, policy, or any other context in all levels of government in Florida. The ban would include all public schools, both government-run and charter, all 12 public Florida Universities, all 28 State Colleges, all state agencies, all county and municipal governments, and all private government contractors.


“Critical Race Theory is racist at its core, and has no place in the State of Florida,” said State Rep. Fine. “The notion that people are good or bad based on the color of their skin runs counter to everything our country was founded on. It is insidious, it is evil, and it is propagated to make our children hate their country. And as we have seen in Brevard County, radical politicians and bureaucrats are indoctrinating this hate into our principals, teachers, and ultimately, students.”

HB 57 would ban the use of the ten divisive concepts that form the foundation of Critical Race Theory, including claims that one race is superior to another, the United States is fundamentally racist, individuals are inherently racists or oppressive based on their race, that individuals are responsible for the actions of other members of the same race, and that meritocracy is racist or was created to oppress other races.

“For those who argue that CRT is not being used in Florida, let me disabuse that notion,” said Rep. Fine.  “In the midst of the greatest crisis to public education in history – responding to COVID – Brevard School Board politicians thought it was more important to spend tens of thousands of dollars hiring a CRT trainer who stated, ‘White America has a deep and thick appetite for black death and violence upon black people.’   The philosophy these politicians are pushing is repugnant and repulsive, and this legislation will eradicate it root and branch.

“HB 57 takes the bold leadership that Governor DeSantis showed in banning the use of CRT in classrooms through state regulation to the next level – codifying it in law and extending its use to all levels of state and local government – as well as those companies who wish to do business with the state.   I look forward to working with the Governor and my colleagues to fight this hateful ideology and continue to advance Florida as a beacon of freedom and American exceptionalism.”

In June, Governor Ron DeSantis emphasized the importance of keeping Critical Race Theory out of Florida schools at state Board of Education meeting. “The woke class wants to teach kids to hate each other, rather than teaching them how to read, but we will not let them bring nonsense ideology into Florida’s schools,” Governor DeSantis said at the time. “As the Governor of Florida, I love this state, and I love my country. I find it unthinkable that there are other people in positions of leadership in the federal government who believe that we should teach kids to hate our country. We will not stand for it here in Florida. I’m proud that we are taking action today to ensure our state continues to have the greatest educational system in the nation.”