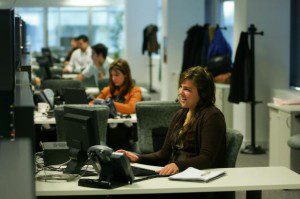 AT&T announced today that, after closing its proposed merger with T-Mobile USA, it will bring back 5,000 wireless call center jobs to the United States, currently outsourced to other countries.

The commitment results from AT&T developing detailed analysis focused specifically on identifying opportunities with the T-Mobile merger to bring good-paying wireless call center jobs back to the United States.

In addition to bringing jobs back, AT&T committed that the merger will not result in any job losses for U.S.-based wireless call center employees of T-Mobile USA or AT&T, who are on the payroll when the merger closes.

The 5,000 new wireless call center jobs at AT&T will offer among the nation’s most highly competitive wages and benefits. AT&T, which has not yet determined where in the U.S. the new jobs will be located, is the nation’s largest employer of full-time union employees and the only unionized major U.S. wireless carrier.

Have You Seen This 6-Foot AT&T Armed Robber? (video)