This week, Orange County Public Schools revealed antisemitic graffiti was discovered in a bathroom at Dr. Phillips High School in Orlando, Florida. This continues a disturbing trend of rising hatred against the Jewish community throughout the state of Florida and here in Orlando. 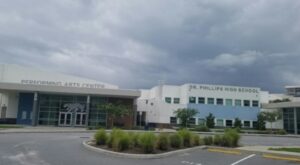 “I apologize for the morning call, but I want to let you know that last evening staff was made aware of an antisemitic message on a bathroom wall on campus,” OCPS Principal Jackie Ramsey said in a Connect Orange message to parents after the incident. “In addition to being extremely disappointed, I want to assure you this is not representative of the values and beliefs of Dr. Phillips High School. We work hard to ensure all students, staff, and families feel safe and welcomed at school.”

Administrators and law enforcement are investigating the incident, according to the call.

“This type of behavior will not be tolerated, and appropriate discipline will be handed out according to the code of student conduct, up to and including suspension, expulsion or arrest,” Principal Ramsey continued. “I also want to express my concern that a photo of the graffiti was posted on social media, which only further spreads the antisemitic messaging.”

School officials reminded Orlando families that if they see something, to say something so inappropriate and concerning behaviors can be dealt with immediately.

“I was horrified to learn of this act of anti-Semitism that happened in District 44 at Dr. Phillips High School,” Orlando State Representative Jennifer Rita Harris said in a statement denouncing this act of hatred in our local community. “It is disheartening to see a display of hatred in one of our schools that was visible to students. I am of Jewish descent, but regardless of ancestry, we must all push back against hate. It’s essential that all community and elected leaders speak out against such acts and make it clear that hatred has no home in Florida. Our students deserve better. Floridians deserve better. We all deserve better.”

Last year, the Anti-Defamation League tracked over 50 incidents of antisemitism in Florida and reported a 50% increase in antisemitic incidents from 2020 to 2021.

“Together, we can keep our campus safe and a positive place to learn,” Principal Ramsey concluded.

Concerned parents can contact the school directly about the latest antisemitic message in Orlando.