The Institute for Sport  & Social Justice announced that its Annual Giant Steps and Hall of Fame Gala will be in-person on December 15th at the Rosen Centre Hotel in Orlando, Florida. This capstone event honors a diverse group of individuals from the world of sport who inspire and motivate those around them to strive for greatness in all facets of life.

The Institute is housed at the University of Central Florida. Previous gala honorees and inductees include Kareem Abdul-Jabbar, Robin Roberts, Carmelo Anthony, Jordyn Wieber, among many others.

This year’s Giant Steps Honorees include: 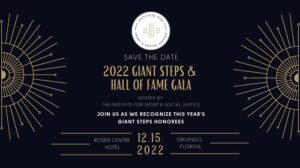 A Hero Among Us:
Jothy Rosenberg
Founder, Who Says I Can’t Foundation

“I am so moved by this year’s Giant Steps Honorees and our Hall of Fame Inductee,” said Richard Lapchick, Founder and President of the Institute. “Sharing their stories will inspire everyone to do more to use the power of sport to heal our world.”

“We are thrilled to be back in person to celebrate some of the true heroes of sport,” says Dr. Jeffrey O’Brien, CEO of The Institute. “This year’s honorees embody our belief in the transcendent power sport to change the world and will inspire us all with their courage and grit. Please join us for a transformational evening!”

The networking reception will begin at 5:30pm and the Gala will begin promptly at 6:30pm.  To become a sponsor or to learn more about sponsorship opportunities, contact Suzi Katz at skatz@sportandsocialjustice.org.