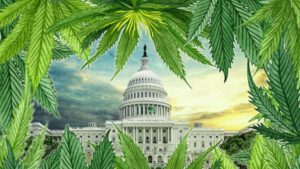 More and more Americans favor a federal mandate legalizing the adult use of marijuana nationwide, according to polling data compiled by The Economist and YouGov.com.

Forty-five percent of respondents said the federal government should legalize the adult use of marijuana across the country. That’s higher than the percentage of Americans who favor a national mandate permitting abortion (41 percent) or physician-assisted suicide (32 percent).


Twenty-one percent of respondents said that the decision whether or not to legalize marijuana should be left primarily up to the individual states. Several pieces of marijuana reform legislation currently pending in Congress, such as The MORE Act and The States Reform Act, seek to deschedule marijuana from the U.S. Controlled Substances Act. These would provide state governments the ability to either legalize or criminalize marijuana absent federal interference.

Only 20 percent of those surveyed agree that cannabis should be “banned nationally.”

“While a plurality of Americans favors the idea of the federal government mandating the states to adopt marijuana legalization, such an outcome remains entirely unlikely in our federalist system,” NORML’s Deputy Director Paul Armentano said about the polling data. “Rather, issues pertaining to marijuana legalization have historically been decided, and continue to be decided, on a state-by-state basis and the best — and most practical way the federal government can respond — is to take steps to undo the past harms of federal prohibition while leaving states free to adopt their own policy alternatives.”