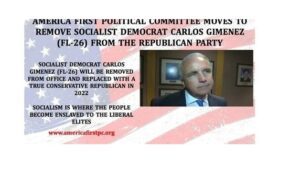 America First Political Committee has formally initiated actions to remove Florida Congressman Carlos Gimenez from the Republican Party. Calling Rep. Gimenez a ‘Persona Non Grata’ in the 26th Congressional District and the State of Florida, the group is blasting him for voting with Nancy Pelosi and “radical leftists” in Washington D.C.


The political committee is also labeling Gimenez a Republican in name only, or RINO, as well as a “Socialist Democrat.” Rep. Gimenez “has a long record of supporting radical socialist policy, dating back to his time as Miami-Dade Mayor,” the group said. “As Miami-Dade Mayor, Gimenez locked down and destroyed small businesses. Gimenez was also tainted with corruption and ethics accusations including unauthorized business dealings with Communist China.”

The group is sayiing that in Washington, D.C., Rep. Gimenez has voted with Nancy Pelosi and also defended disgraced Liz Cheney after she voted in favor of the impeachment against Donald Trump. Gimenez doubled down in defending Cheney after the Republican Caucus censored and removed Liz Cheney from Republican Party Leadership. The group is also angry that Rep. Gimenez went further in voting for the January 6th “Democrat witch hunt” that America First says is “against American Citizens and Republican voters.”

America First has also been actively involved in censuring and removing another branded RINO, Liz Cheney, from the Wyoming Republican Party and stripping her of all leadership positions in the Republican Party. The group says Gimenez, like Liz Cheney, openly votes and sides with the Democrats.

As the divisions in the Democratic Party continue, there is still a clear divide in the Republican Party as well ahead of the 2022 midterm elections.