Attorney General Pam Bondi’s office plans to appeal a Broward County judge’s ruling that said tickets issued by police officers for running a red light are unconstitutional because the fine is higher than that levied when a driver is ticketed by a red light camera. 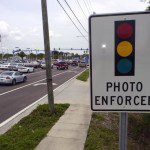 The odd ruling by Broward County Court Judge Fred Berman on May 31 said that police couldn’t issue red light running tickets because the higher fine – more than $250 compared to $158 for those caught by a camera – violates the equal protection clause.

The South Florida Sun-Sentinel reported Thursday that cities in Broward County, including Fort Lauderdale, said their officers will continue to issue citations for now, even though they could be thrown out.

A police officer who issues a ticket for running a red light is giving it to the driver, whereas red-light camera citations are given to the owner of a vehicle.

Jennifer Krell Davis, a spokeswoman for Bondi, said the AG will appeal the ruling.