Activists to March Through Downtown Orlando to Demand Justice for Animals 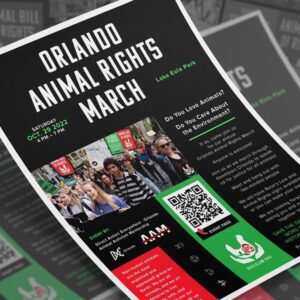 Dozens of activists with the grassroots animal rights network Direct Action Everywhere (DxE) are planning a march and protest at Lake Eola Park starting at 4pm on Saturday, October 29, 2022. The protest follows a successful DxE Orlando campaign to have foie gras removed from the menus of five local restaurants.

In early October, two leading members of DxE, Wayne Hsiung and Paul Picklesimer, made national news when they were acquitted on all charges in the Smithfield piglet rescue trial. Now, Orlando activists will hit the streets to demand that all forms of animal exploitation and harm be abolished.

“Non-human animals are the most exploited and oppressed group on Earth,” states the Facebook event description. “It is past time humans stop torturing and killing other animals. We are all animals, and we all deserve to live happy, safe, and free. Let’s use our voices to speak up for all the animals whose screams are being ignored.”


Activists say the action will highlight a piece of proposed legislation called Rose’s Law, which seeks to use civil engagement and nonviolent action to help ensure that everyone, regardless of race, gender, ability, or species, is granted basic rights. The bill points to scientific evidence that animals are sentient individuals, and therefore deserve to be protected from oppression. It subsequently criticizes the current lack of appropriate legal protections for animals, and calls for total abolition of all forms of animal exploitation.

DxE says that legislators continually mislead constituents with legislation focusing on animal welfare. Such legislation supposedly ensures humane treatment of farm animals, yet conversely permits horrific abuses seen nationwide. But the overarching issue highlighted by DxE lies in the commodity status of animals – as long as animals are viewed and labeled as mere products in a money-making system, rather than sentient beings deserving of freedom and protection, true justice for them will never be possible.

DxE is calling for government officials to take immediate action to raise the status of animals to personhood, and begin the transition to a society devoid of any form of oppression. The group is also making an urgent call for more members of the community to join the cause. As stated in a video featured on DxE’s website: “It’s through the strength of community that we are able to support each other, learn from each other, and hold each other accountable. None of our work is possible without community. What this all amounts to is the capacity to create revolutionary social and political change for animals, shutting down the industries that exploit them and enshrining their rights in law. Animal liberation is going to happen in our lifetimes.”

Investigators with Direct Action Everywhere (DxE) enter farms, slaughterhouses, and other agricultural facilities to document abuses and rescue sick and injured animals, and activists have been subjected to FBI raids and felony prosecutions for these investigations and rescues.