One Tea Party hero, Senator-elect Rand Paul (R-KY), jumped on the anti-earmark bandwagon early, making “a ban on wasteful earmark spending in Washington D.C. one of the key points of his campaign” in March. Lambasting lawmakers who opt for “photo-ops with oversized fake cardboard checks,” Paul vowed to “dismantle the culture of professional politicians” even if he “ruffled a lot of establishment feathers” while doing it. 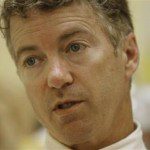 But after joining the GOP flock on Election Day, Paul is singing a different tune. In a Wall Street Journal profile this weekend, Paul signaled an about-face on his earmark position, committing to “fight for Kentucky’s share of earmarks and federal pork.” After all, he’s “not that crazy” of a libertarian.

In a bigger shift from his campaign pledge to end earmarks, he says they are a bad “symbol” of easy spending but that he will fight for Kentucky’s share of earmarks and federal pork, as long as it’s doled out transparently at the committee level and not parachuted in in the dead of night. “I will advocate for Kentucky’s interests,” he says.

So you’re not a crazy libertarian? “Not that crazy,” he cracks.