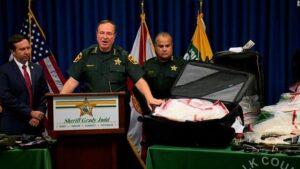 The investigation found large amounts of methamphetamine were being smuggled from California to Florida in checked luggage on domestic flights, including to Orlando.

Illegal drugs, firearms, and currency seized in the drug operation:


The investigation was initiated in September 2020 when detectives executed a search warrant in Winter Haven and seized a pound of methamphetamine. From that point forward, detectives continued to make undercover narcotics purchases from dealers in the Winter Haven area, and learned that large amounts of methamphetamine were being smuggled from California to Florida in checked luggage on domestic flights. In February 2022, detectives began a wiretap investigation, during which court-order intercept of communications between suspects within the criminal drug trafficking organization were initiated and monitored.

As a result of the investigation, 85 suspects were arrested and charged with a total of 355 felonies and 93 misdemeanors. The suspects’ previous criminal histories include 690 previous felonies, 712 previous misdemeanors, and 194 felony convictions.

“I’m so very proud of our detectives and the agents and law enforcement officers who partnered with us to get these dangerous drugs and felons off the street,” said Polk County Sheriff Grady Judd. “This is the single largest seizure of drugs and arrests made in the history of Polk County during an undercover wiretap investigation. We will continue to follow up leads and make more arrests, so those who think they got away from us – think again.”

According to law enforcement, the six ring leaders of the organization are:


Demarcus Terrell Jefferson, DOB 10/19/1989. On September 13, 2020, Demarcus crashed his 2015 Kia Optima into the Marathon gas station on Havendale Blvd in Winter Haven, killing a male customer inside. He has been charged with DUI Manslaughter and his criminal case is still pending. Detectives received information that Demarcus and other family members were involved in smuggling large amounts of methamphetamine through the airlines in checked luggage on domestic flights from California. Detectives made multiple undercover drug purchases at his home, 2073 9th Lane NE in Winter Haven. During the investigation, detectives also learned that one of Demarcus’ brothers, Devontae, died as a result of an overdose of Fentanyl and Xanax at that same house on March 24, 2020. Drugs continued to be sold by family members after his death.

Dwayne Kenneth Stackhouse, Sr., DOB 12/2/1982. Stackhouse was identified as a large scale cocaine supplier in the central Florida area. On April 20, 2022, detectives conducted a traffic stop on US Hwy 27 in Davenport as Stackhouse was traveling from Orlando. They seized one kilogram of cocaine that was concealed inside a leather zippered Bible case. Detectives also executed a search warrant at his residence, 160 Serenity Blvd. Apt #202 in Lake Wales, where they found another pound of cocaine, marijuana, $13,000 cash, and a firearm. He was charged with trafficking in cocaine (F1), possession of a vehicle for drug trafficking (F2), possession of a firearm by a convicted felon (F2), and possession of drug paraphernalia (M1). They arrested his partner, Vicente Carranza-Basanta, the same day. Stackhouse was released from jail on May 31, 2022, after posting bond in the amount of $116,250, and a GPS ankle monitor was placed on him.

Abadosh McKenzie, DOB 5/8/1981. McKenzie was identified as a counterfeit Fentanyl pill supplier, as well as a supplier of methamphetamine, MDMA, and marijuana. He lives in Riverview but conducts undercover drug sales in Winter Haven. On September 14, 2021, McKenzie attempted to flee from undercover detectives but crashed his vehicle. He was taken into custody but released from jail two days later after posting bond. He was re-arrested on warrants on September 20, 2021. During this investigation, he was arrested on June 1, 2022, and charged with trafficking in Fentanyl.

Lenard Henderson, DOB 1/7/1980. He was identified as a ring leader in the drug trafficking organization, as a large-scale cocaine supplier. Several suspects who were arrested obtained their narcotics from Henderson. He was arrested on August 16, 2022, and charged with 25 counts conspiracy to sell cocaine, conspiracy to sell marijuana, conspiracy to purchase marijuana, and use of a two-way communication device to commit a felony. He was released from jail after posting $24,500 bond.

Javarius Samuel, DOB 2/14/1991. On August 5, 2022, detectives in Fresno served a search warrant on his residence there, and seized 68 pounds of marijuana, 109 grams of Fentanyl, 14 grams of cocaine, 3 firearms, and $45,000 cash. The same day, detectives conducted a traffic stop and arrested Samuel on his two active warrants here in Florida – he has been using a forged Georgia driver’s license, with which he used to evade law enforcement and travel back and forth from Florida to California. They served a search warrant at his Davenport address (928 Brooklet Drive) and seized two loaded black AK-47 pistols, which were out in plain view and in a home with six children. He was arrested and charged with conspiracy to traffic in Fentanyl, conspiracy to traffic in heroin, conspiracy to sell marijuana, armed robbery, possession of a firearm by a convicted felon, possession of a fictitious driver’s license, felony battery, use of a two-way communication device to commit a felony, and three counts of probation violation. He is being held on no bond.