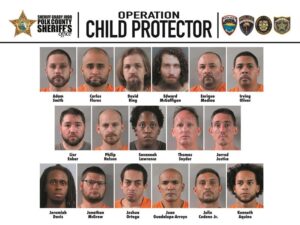 “These are nasty, nasty, nasty people and when we go through this, understand that obviously, we can’t even use the words they use,” Sheriff Grady Judd said. “We obviously can’t show you the pictures and the video clips that they sent to what they thought were 13-year-old little girls and little boys.”

The suspects communicated with and solicited who they thought were children between the ages of 13 and 14 for sex acts. The suspects showed up to an undercover location in Polk County at separate times to meet who they thought were children, to sexually batter them. Some of them transmitted pornographic images while grooming and soliciting the children online, and they were appropriately charged for that as well.

In all, detectives arrested 17 suspects, who face a total of 49 felony and two misdemeanor charges which include: traveling to meet a minor for sex, attempted lewd battery, use of a computer to seduce a child, unlawful use of a two-way communication device, and transmission of material harmful to a child; six suspects brought condoms, and nine suspects have criminal histories (with 27 total previous felonies, and 22 total previous misdemeanors). The youngest suspect arrested is 26 years old, and the two oldest suspects are 47 years old. They were all from the central Florida area, except one suspect who was here visiting from California.