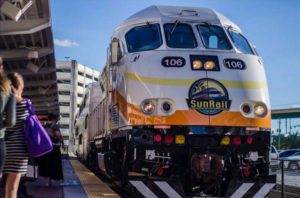 Last Sunday, the SunRail trains were running through Orlando on a privately funded special service. While the ridership numbers likely suffered from a late announcement of the Sunday service as well as a limited number of trains and the schedule, it was not the lowest ridership for special weekend service to date. 14 trains ran between 1:30pm and 10:03pm on Sunday, March 5th – 7 northbound and 7 southbound.

So how much does it cost to run special weekend service for SunRail?

It does cost an additional $1,100 for fare equipment, but SunRail will cover that expense.

Out of This World NASA Experience at The Mall at Millenia