It sits in the Atlantic, frail and appearing to be on the edge of decay. If you didn’t know better, you might think it was that way deliberately. Possibly allowed to age so it could be used in one of those creepy teenage horror flicks. 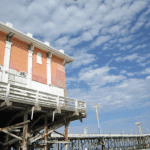 But at the moment, the Daytona Beach Pier is just sitting there. A big pile of wood out in the middle of the ocean.

The 85-year-old landmark has been closed for several months. The city is pouring about $3-million into repairs and improvements.

For the past decade, Daytona leaders have hemmed and hawed over what should be done to the pier and the adjoining boardwalk. Ambitious plans have been on the table and then scrapped. The goal of the revitalization effort has always been to make the area more “family friendly.” Several mom and pop businesses were bulldozed in the city’s effort to get rid of the sleaze and replace it with wholesome fun.

“Progress” has been made. The boardwalk now features a bungee-type ride, a Ferris wheel and go-carts. Of course, finding someone to operate the rides when you’re there isn’t always easy. Most of the time they’re closed.

The shops, restaurants and bars of Ocean Walk, a multimillion-dollar development that kicked off the area’s “renaissance,” are busy during special events like Speed Weeks, Bike Week and Spring Break. But the businesses struggle during the off-season. With the exception of a movie theater, there’s just nothing to draw the locals.

One step forward, two steps back. That could be Daytona’s motto for the boardwalk redevelopment efforts. And now comes word this week that plans to redevelop the pier into a destination restaurant have hit a major snag. It seems the group of investors who wanted to open a restaurant on the pier abruptly pulled out of the negotiations. The reason? Too much political drama.

Soon, leaders will start scrambling again to find a possible tenant. They wouldn’t mind having a national chain restaurant. At one time, Joe’s Crab Shack had been a potential candidate and might be again. 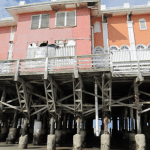 But even if all the stars line up and a national restaurant chain moves into the pier, what’s next? Will it be another eatery that does well for three months of the year and then struggles to attract locals once the tourists go home? Locals might want to patronize Joe’s Crab Shack, but first they have to think about parking. There’s a garage across A1A, but it can be pricey depending on when you go. Most locals don’t want to deal with the hassle. For those who do end up shelling out money for parking and then a nice meal, what’s keeping them at the boardwalk to spend more money? Tacky t-shirt shops and carnival rides that are never open?

I only bring these things up to make a larger point. Do Daytona city leaders really have a cohesive strategy when it comes to the redevelopment of the boardwalk and pier? Landing a major restaurant at the pier would be nice, but it’s not necessarily a game changer in the area’s renaissance.

It will take vision and having people committed to carrying out the vision to really bring the area back to life. But it’s also going to take cooperation. Cooperation among the existing businesses, investors and city leaders to make the boardwalk and pier a viable entertainment option for locals year-round. If those things don’t happen, I guess the pier could be a good backdrop for one of those creepy teenage horror flicks.