Today, Mayor Dyer and the Early Learning Coalition of Orange County will “work-along” with children from the Parramore Kidz Zone program to build mile marker mosaics for Parramore Heritage Park in honor of the 14th Annual Children’s Week. 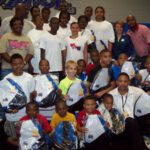 Children’s Week highlights issues facing children across the state and promotes their health, safety and well-being during the legislative season.

The City of Orlando believes in celebrating and promoting the connections that support and strengthen children in our community.  Mayor Dyer announced in his 2010 State of the City Address that thanks to Parramore Kidz Zone there has been an 80% reduction in juvenile crime as well as a 13% increase in FCAT math scores since the program’s inception. Modeled after the Harlem Children’s Zone, Parramore Kidz Zone launched by Mayor Dyer in 2006, employs creative outreach to engage a critical mass of Parramore’s children and linking them to positive opportunities, including pre-kindergarten education, parenting education, health care, mentoring, tutoring and constructive activities when school is out.

“Children live better lives and make wiser choices when they are given opportunities to contribute to and serve their communities,” said Mayor Dyer. “Building these mile markers allows them to actively play a role in contributing to the neighborhood that they live in.”

As part of his Strengthen Orlando plan, Mayor Dyer transitioned his series of work-alongs to focus primarily on community service. Through leading by example, Mayor Dyer encourages citizens to get involved and continually give back to their community.  Citizens interested in volunteering or donating opportunities, please contact the City of Orlando Office of Community Affairs at 407.246.2500.