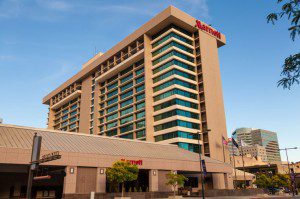 Lowly paid hotel maids at Marriott hotels in Orlando may receive a little extra cash, thanks to a campaign called “The Envelope Please.”

Beginning this week the hotel chain has partnered with the woman’s advocacy group A Woman’s Nation to place envelopes in more than 160,000 rooms in the U.S. and Canada, that encourage guests to leave a tip for the house keepers that clean  hotel rooms. Marriott brands like Courtyard, Residence Inn, J.W. Marriott and Ritz-Carlton are expected to participate in the campaign.

Former California first lady Maria Shriver who founded A Woman’s Nation, spearheaded the campaign. “The Envelope Please” initiative came out of discussions with hotel housekeepers who said they are often forgotten when it comes to tipping, according to news reports.

Depending on the room rate, tips of between $1 to $5 per night are being suggested, and more for a high-price suite, according to Marriott International CEO Arne Sorenson, abcnews.com reports.

On average, housekeepers earn less than $10 per hour, according to the U.S. Bureau and Labor Statistics.