Fifth Third Bank is giving money away . . . seriously? Seriously. It’s all part of an effort to promote an expanded No-Fee ATM program, available to individuals who open a checking account before August 15. In addition to being able to use Fifth Third ATMs for free, new customers will receive automatic refunds for fees accrued from other banks’ ATMs, up to 10 transactions a month. 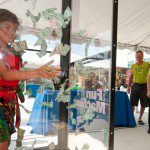 To generate interest in the new program and to underscore the savings it will provide, Fifth Third Bank will set up a “cash grab” booth, where people will be given the chance to take home as much money as they can snatch from dollar bills swirling in the air. Participation is on a first-come, first-served basis at the following location and time:

To further extend “cash flow” into the community, Fifth Third Bank will match the amount of money given away in the cash grab booth in a donation to benefit the Summer of Dreams program – a 10-week camp providing food and activities for homeless children in Orange County and financial counseling for their parents.