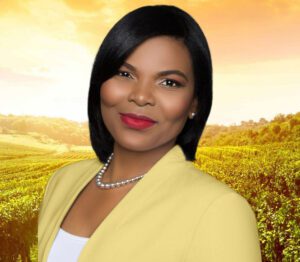 J.R. Gaillot, Ryan Morales and Naomi Esther Blemur are running to become the nominee for Florida Agriculture Commissioner in the Democratic primary on August 23rd. The Democratic candidates are seeking to replicate Nikki Fried’s 2018 success in the race for Agriculture Commissioner, after Fried decided to run for Governor this year. But concerns are being raised against the leading Democratic candidate, with the potential problems spelling trouble for the entire ticket.

Democratic candidate Naomi Blemur may be leading the race currently, but her critics say she is a prime example of the dismal future of a Democratic Party that continues to value loyalty to the establishment over the working people they supposedly represent.


While she seems to have a compelling personal story, Blemur’s policies are nowhere to be found on the internet or elsewhere. This is raising concerns about her political aspirations and posing questions about her commitment to representing Floridians and serving as Agriculture Commissioner. Her opponents are also pointing out her personal connections to extensive fraud, name changes, a flurry of court cases and a husband who defrauded millions of dollars from Floridia’s Haitian community.

In a political climate where conspiracies and rumors have plagued the national conversation, Democrats must ask themselves whether Blemur should be a contender in this primary at all. With Democrats facing an already catastrophic identity crisis, the eventual nominee must be well-versed in policy, steadfast in their platform, and infallible in their opposition.

Prior to registering as a Democrat in Florida, Blemur belonged to the Democratic Party of New York under the name “Naromie Leriche.” Under this name, Blemur founded the non-profit Esther’s House of Hope, Inc. in 2008 at a Cambria Heights property, which she purchased in 2006 for $300,000. This purchase was not reported on her campaign filings despite it qualifying as a personal asset that must be disclosed under Florida election laws.

Blemur’s name changes have now become so convoluted that even close friends don’t know what to call Blemur. Her former classmate attempted to endorse her as “Naromie,” and she has several legal documents and publications under the same name that have been linked to the purchase of the unreported asset, Esther’s House of Hope, Inc.

Questions continue to arise when researching her repertoire. As a self-described “Life Coach,” she wrote a book titled The Process to Purpose, credited in the “About the Author” section once again under the name “Naromie Leriche.” In the same paragraph, a different spelling of her name appears: “Naomie’s passion is to see men & women fulfill their purpose and walk in destiny.”

Esther’s House of Hope and Blemur’s ties to the non-profit have also raised concerns by members of Florida’s Haitian community, citing a pattern of illicit and fraudulent actions perpetrated by her husband, Anis Blemur. According to reports, he preyed on members of his own community in real-estate and credit card scams, wire fraud, as well as embezzling funds from the political campaign of former Miami mayor Smith Joseph. Anis was sentenced to seven years in federal prison, and as the Miami New Times reported, “Investigators say he stole more than $1.6 million from victims in the Haitian community…”


Prior to Fried winning, the position had not been held by a Democrat for two decades. Agriculture Commissioner is currently one of three elected cabinet seats within the Florida Executive Branch, along with the Attorney General and the Chief Financial Officer. The three aforementioned positions are the only chance for an opposition party to gain statewide influence within the executive. There’s also Val Demings’ campaign for U.S. Senator, which carries national importance for the Democratic Party.

Why would the Democratic establishment continue to support the controversial campaign of Naomi Blemur for Agriculture Commissioner? The risk to the entire Democratic Party ticket is evident, as Florida Republicans will not hesitate to attack every candidate connected to these potential political problems.

At the very least, the Florida Democratic Party should be vetting statewide candidates better and making sure voters have the best options possible. That includes answering serious concerns being raised against leading Democratic candidates – before they face off against a Republican Party that has dominated Florida.

If she intends to simply ride the coattails of the Democratic ticket to possible victory, there are more problems for voters. Whoever wins the nomination could also be Florida Democrats’ only voice within the executive if the 2022 elections follow the last statewide results. The nominee for Agriculture Commissioner should not further jeopardize the chances for Democratic Party ticket to compete against Republicans like Gov. Ron DeSantis and Senator Marco Rubio.

Do Democratic voters deserve better from a statewide candidate?

West Orlando News could not reach Blemur’s campaign as the phone number listed on her social media went straight to voicemail and could not accept new messages. Check out Naomi Blemur’s campaign website here. She is also active in the local Democratic Party, serving as a DEC Committee Member for Miami-Dade.

UPDATE: Democrats Call for Agriculture Commissioner Candidate to Drop Out Ahead of Primary