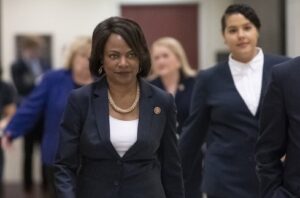 U.S. Representative Val Demings continued her efforts to draw attention to the increased danger of natural disasters during the COVID-19 epidemic, leading a letter signed by every Democratic Member of Congress from Florida to Emergency Management Director Jared Moskowitz. The letter asks for a congressional briefing on the state’s plan for the 2020 Atlantic hurricane season, which is expected to overlap with the COVID-19 pandemic.

“Each year, millions of Americans are forced to flee from natural disasters like hurricanes, floods, and fires. We crowd together in shelters, pack hotels, and struggle to find food and other essentials,” said Rep. Demings. “With hurricane season in the South and wildfire season in western states less than six weeks away, I am deeply concerned about the lack of preparation and information-sharing. Families need to be able to make plans. State and local governments need federal support to prepare for safe evacuations. Only by working together and looking ahead can we save lives when these inevitable disasters happen.”


On April 2nd, hurricane forecasters at Colorado State University predicted an “above-average” hurricane season with 16 named storms, eight hurricanes, and four major hurricanes. On April 16th, the Weather Channel predicted a “very active” 2020 hurricane season with 18 named storms — nine of them hurricanes, four of them major hurricanes. Last year, NOAA estimated that 1,520 tornadoes occurred in the U.S., the fourth highest yearly total on record. In 2018 and 2019 there were 58,083 and 50,477 wildfires, respectively, including the largest wildfire in California’s state history.

“Since time is of the essence, it is vital that our federal, state, and local partners work to develop policies, plans, and best practices for how state, local, and federal partners can keep people safe during a pandemic-disaster event. While the immediate situation must be our top concern, this is not merely a concern for today. As climate change continues to escalate and the risk of future disasters and future pandemics becomes more likely, this is a problem that deserves urgent and ongoing attention.”

Nearly 100% of the county is currently under stay at home orders due to the COVID-19 pandemic, and tens of thousands of Americans have died. This administration’s response to the crisis has been among the worst in the developed world due to a lack of planning, preparedness, and swift action—mistakes it would be deadly to repeat.