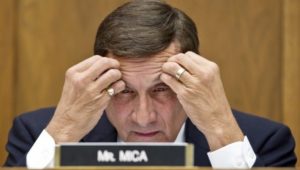 The Democratic Congressional Campaign Committee continues unleashing on Republican John Mica. Turning Mica’s party loyalty and support for Donald Trump against him, the DCCC is connecting Trump’s “wildly un-American and racist” recent statements directly to Mica and his values. “In his comments on District Judge Gonzalo Curiel, Donald Trump has once again callously attacked the Latino community and laid bare his blatant racism and hate towards huge groups of voters,” a statement from the DCCC said. “Trump is the Republican Party standard-bearer, and thus defines the Republican Party’s values. By continuing to support Trump, John Mica clearly demonstrates that party loyalty and politics mean more than human decency and the constitutional foundation of this country.”

Trump’s remarks, which he doubled down on again yesterday, are not just a “wildly” offensive attacks on Latinos, Muslims and the entire judiciary system, they are un-American according to Democrats – and John Mica is complicit in them because he supports Trump as the nominee.

“Donald Trump’s most recent racist remarks have brought the Republican Party to a new, un-American low and defines who they are as a Party,” said Jermaine House of the DCCC. “John Mica’s willingness to stand by Trump, while he attacks Mexican-Americans, those of Muslim faith and our American values as a whole, indicates who’s side John Mica is on, and it’s not that of the voters or this country.”

“As he returns to Washington today, John Mica and Trump are one and the same – on the wrong side of Americans,” the DCCC added.