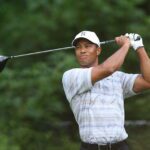 Speaking for no more than five minutes with ESPN’s Tom Rinaldi, the world’s number one golfer declined to answer specific questions related to the car crash, and as well, the depth of his infidelity.  While Woods did not say what he was being treated for, he did say that “I didn’t know that I was that bad.

Woods, who said less than one week ago he would be returning to play in the Masters Golf Tournament early next month, told Rinaldi that he was  “a little nervous” as to how he would be received by his fans.