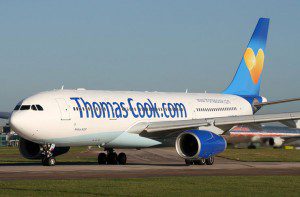 This is the first non-stop flight to connect Orlando International Airport (MCO) to London Stansted.

The United Kingdom is one of the most popular international destinations at MCO with over 1.2 million travelers during the last 12 months.

“Last year Thomas Cook accounted for more than 100,000 passengers at Orlando International Airport and with news of further service expansions we’re hopeful they will continue to build their seasonal business to a full year-round operation,” said Frank Kruppenbacher, Chairman of the Greater Orlando Aviation Authority, in a statement.

In 2015 Thomas Cook is scheduled to operate 37 percent more flights from MCO than in 2014, with the addition of Belfast and Stansted flights, as well as increasing service to Manchester and Glasgow.

Thomas Cook, which resumed MCO service in March 2014, operates A330-200 aircraft to Orlando, with between 314 and 325 seats. The airline recently upgraded its economy seating to include a James Martin three course meal, a new on demand in-seat, in-flight entertainment system and extra legroom.