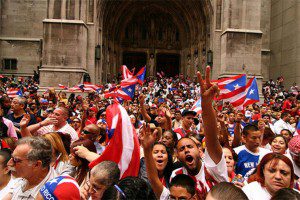 The debt crisis facing Puerto Rico is leading tens of thousands of people to flee the Caribbean island in search of a better life in the United States.

According to The Guardian, unable to repay its $73 billion debt, Puerto Rico has begun to ration water, close schools and its healthcare system is collapsing. About 45 percent of the island’s people live in poverty.

“Most Puerto Ricans are heading to central Florida where they are also meeting hardship and struggle,” says Edgardo González, coordinator of the Defenders of Puerto Rico, an activist group, The Guardian reported. Many cannot find jobs or even housing.

González compares the current exodus to the immigration in the 1930s and 40s. Tens of thousands of Puerto Ricans fled to the U.S. following the Great Depression and World War 11.

“Some might stay with family for a few weeks, but for those who don’t have family, people end up homeless because of the lack of services,” he said.

“People end up living in hotels, living in cars or on the street. Then you have people who are homeless with kids, who get in trouble with the law, and you have to get into it with childcare and welfare services.”

Presentation on Puerto Ricans In Florida Set for August 4th