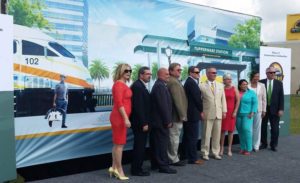 The Florida Department of Transportation, together with local and federal funding partners from the Federal Transit Administration and community leaders from the city of Orlando and Volusia, Seminole, Orange and Osceola counties celebrated the official start of construction to add four more SunRail stations south of Sand Lake Road.

Today’s groundbreaking, near the site of the future Tupperware Station in Osceola County, marks the first expansion of SunRail, which began operations on May 1, 2014.

Phase 2 South will offer another 17.2 miles of commuter rail service between the Sand Lake Road station and the Poinciana station. It will also include four new stations including Orange County’s Meadow Woods neighborhood, Osceola Parkway, downtown Kissimmee and Poinciana. In addition to building four new stations, upcoming construction work includes grade crossing improvements, construction of a vehicle storage and layover facilities at the Poinciana station, installation of a second track along most of the corridor, and an upgraded signal system. Middlesex-Herzog, a joint venture, was awarded the Design-Build construction contract this spring by the Florida Department of Transportation.

The work should take about two years, and the expansion is expected to open for passenger service in early 2018. The $187 million project is funded 50 percent by the Federal Transit Administration, and 25% each by the state of Florida and local funding partners.

While Phase 2 South is underway, the Florida Department of Transportation is laying the groundwork for Phase 3, a 5.5-mile extension to Orlando International Airport’s $470 million South Automated People Mover Complex and Intermodal Transportation Facility.