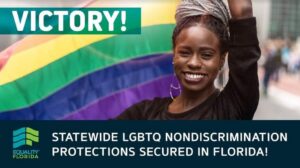 
“For the past 10 years I’ve been fighting to pass the Florida Competitive Workforce Act…and just like that…WE WON,” State Representative Carlos Guillermo Smith posted online following the ruling. “LGBTQ Floridians are protected from discrimination in employment, housing and public accommodations. You read that right.”

The Florida Commission on Human Relations now states clearly “the FCHR accepts claims of sex discrimination based on gender identity or sexual orientation for investigation in employment and public accommodations complaints. Furthermore, the FCHR investigates housing discrimination under the Florida Fair Housing Act and Title VIII, based upon race, color, national origin, religion, sex, familial status, and disability. The FCHR is committed to investigating housing violations based upon sex discrimination due to non-conformity with gender stereotypes.”

“When I was elected to the legislature I set the goal of securing protections for LGBTQ people across our state,” Rep. Smith continued. “Today that goal was achieved. This is a moment to celebrate and continue the work of making our state a welcoming and inclusive place for everyone to live, work and visit.”